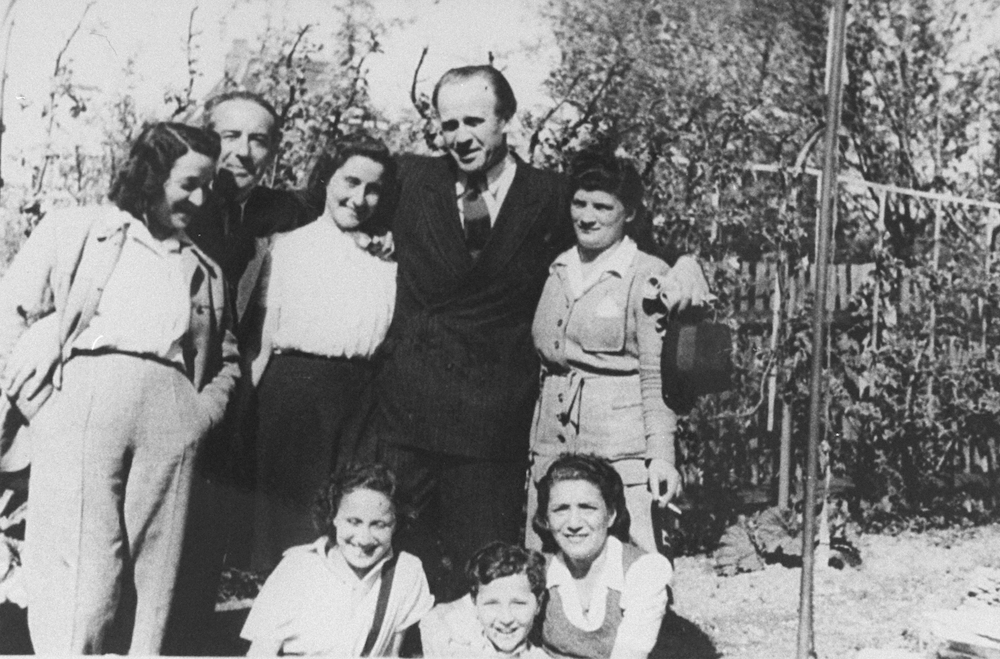 Oskar Schindler (second from the right) poses with a group of Jews he rescued one year after the war (1946). ——US Holocaust Memorial Museum, courtesy of Leopold Page Photographic Collection

Following the Nazi invasion of Poland, Oskar Schindler, a German Catholic industrialist, moved to Kraków and assumed responsibility for the operation of two formerly Jewish-owned manufacturers of enamel kitchenware. He then established his own enamelworks in Zabłocie, outside Kraków. That factory became a haven for about nine hundred Jewish workers, providing them relief from the brutality of the Płaszów labor camp nearby.

In October 1944 Schindler was granted permission to relocate his defunct enamelworks to Brünnlitz, Czechoslovakia—this time as an armaments factory—and to take with him the Jewish workers from Zabłocie. He succeeded in transferring to Brünnlitz approximately eight hundred Jewish men from the Gross-Rosen camp and three hundred Jewish women from Auschwitz, ensuring their humane treatment and, ultimately, saving their lives.

In 1962, Yad Vashem awarded Schindler the title “Righteous Among the Nations” in recognition of his humanitarian contribution, and in 1993, the United States Holocaust Memorial Council posthumously presented to him the Museum’s Medal of Remembrance. This medal, rarely presented, is intended to honor deserving recipients for extraordinary deeds during the Holocaust and in the cause of Remembrance. Emilie Schindler accepted the medal on behalf of her husband at a ceremony in the Museum’s Hall of Remembrance.

The following bibliography was compiled to guide readers to materials on Oskar Schindler that are in the Library’s collection. It is not meant to be exhaustive. Annotations are provided to help the user determine the item’s focus, and call numbers for the Museum’s Library are given in parentheses following each citation. Those unable to visit might be able to find these works in a nearby public library or acquire them through interlibrary loan. Follow the “Find in a library near you” link in each citation and enter your zip code at the Open WorldCat search screen. The results of that search indicate all libraries in your area that own that particular title. Talk to your local librarian for assistance.

To search library catalogs or other electronic search tools for materials on Oskar Schindler, Schindler’s List, or related topics, use the following Library of Congress subject headings to retrieve the most relevant citations: