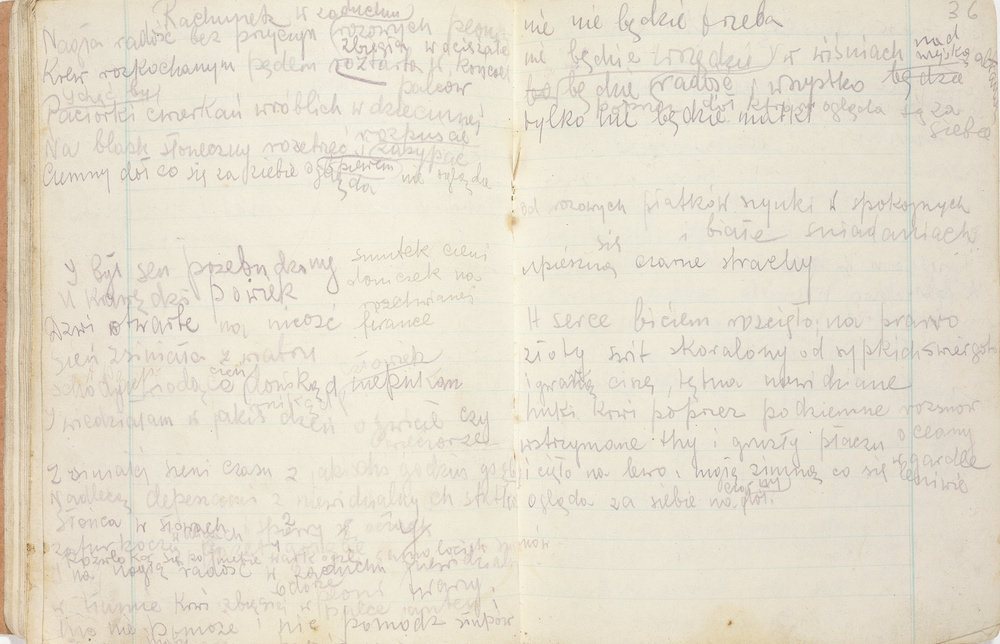 A notebook of poetry written by Melania Fogelbaum, a poetess in the Lodz ghetto. —--United States Holocaust Memorial Museum, courtesy of Helena Zymler-Svantesson

Shortly after World War II, philosopher Theodor Adorno asserted that “to write poetry after Auschwitz is barbaric.” This statement reflects the initial response of many readers when considering poetry and fiction about the Holocaust; namely that any attempt to capture life in the ghettos and concentration camps on the page simply diminishes the horror of the realities faced by those who lived and died at the hands of the Nazis. Yet many survivors and their descendants have used poetry to effectively distill the terror and dread of the Holocaust into words. For some writers, the emotional and personal nature of the form makes poetry the ideal medium in which to express ideas and sentiments that otherwise could not be adequately rendered through art. In short, poetry allows these writers to express the inexpressible.

Early poets of the Holocaust, including survivors Paul Celan and Nelly Sachs, wrestled with a variety of interrelated subjects based on their experiences, including profound loss and the nature of victimhood. These issues manifested themselves in poems of stark power and beauty. Later poets have explored themes of memory and Jewish identity in a world “after Auschwitz.” That so many of these works are accessible to many readers only in translation compounds the issues raised by these poems.

The following bibliography was compiled to guide readers to materials on Holocaust poetry as well as a variety of poetry collections that explore Holocaust-related themes. It is not meant to be exhaustive. Annotations are provided to help the user determine the item’s focus, and call numbers for the Museum’s Library are given in parentheses following each citation. Those unable to visit might be able to find these works in a nearby public library or acquire them through interlibrary loan. Follow the “Find in a library near you” link in each citation and enter your zip code at the Open WorldCat search screen. The results of that search indicate all libraries in your area that own that particular title. Talk to your local librarian for assistance.

Ask at the reference desk to see the subject files labeled “Poetry” containing poems and related newspaper and periodical articles.

To search library catalogs for materials on Holocaust poetry, use the following Library of Congress subject headings to retrieve the most relevant citations: