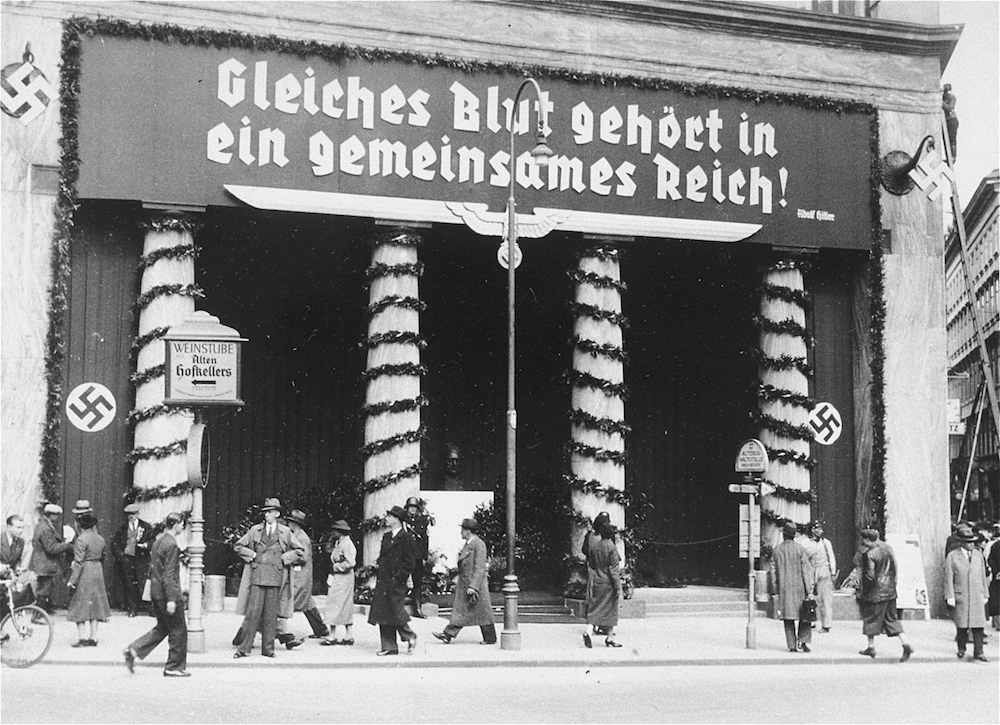 The Loos Haus, Vienna, 1938. The banner reads, “Those of the same blood belong in the same Reich!” (April 1938) —US Holocaust Memorial Museum, courtesy of Library of Congress

As the Second World War came to an end in 1945, the Western world was buried in the remnants of Nazi destruction, facing a long and difficult recovery. Many Jewish organizations anticipated the road ahead, preparing and planning restitution efforts before the closing stages of the War, yet once the time came to implement these plans, unforeseen obstacles appeared, particularly the Allies’ quandary over stabilizing versus punishing Germany. In trying to avoid the mistakes of World War I, the Allies chose first to steady the economically and politically tottering country. This decision meant that repercussions for Nazi atrocities would have to be set aside temporarily. By 1953, though, with some economic stability reestablished, the German government signed the Luxemburg agreements with Israel, obligating them to pay reparations for Nazi policies and aggression.

In the years that followed, as the displaced persons crisis waned, the remaining restitution issues lost their urgency, leaving the matter to linger for several decades. Although Switzerland engaged in cursory restitution talks in the 1950s, no settlements were devised. These issues found a rejuvenated forum, however, in the 1990s with the exposure of Swiss banking practices during the war. A series of articles published in an Israeli financial daily revealed Switzerland’s resistance to returning looted assets to the rightful owners or their heirs. This controversy prompted the United States and an Independent Committee to reinvestigate the fate of these assets. These inquiries expanded the realm of Nazi era claims, revealing a variety of additional issues, including the dispersal of unclaimed life insurance benefits, cultural institutions’ acquisition of looted art and artifacts, corporations profiting through years of forced labor, and Switzerland’s role as the major financial mediator of the Nazi war machine.

A few of these issues have obtained some legal closure in recent years. In 1998, the Swiss banks agreed to pay $1.25 billion in benefits to still-unknown claimants for future dispersal. That same year, Germany’s new chancellor vowed to make amends to Nazi forced laborers, a promise kept two years later when the Bundestag established the Foundation, “Remembrance, Responsibility, and Future.” But other restitution issues continue to be investigated and negotiated, and given the complexity of these matters, this process might continue for years to come.

This bibliography was compiled to guide readers to selected materials on Holocaust-era asset restitution and indemnification that are in the Library’s collection. It is not meant to be exhaustive. Annotations are provided to help the user determine the item’s focus, and call numbers for the Museum’s Library are given in parentheses following each citation. Those unable to visit might be able to find these works in a nearby public library or acquire them through interlibrary loan. Follow the “Find in a library near you” link in each citation and enter your zip code at the Open WorldCat search screen. The results of that search indicate all libraries in your area that own that particular title. Talk to your local librarian for assistance.

To search library catalogs or other electronic search tools for materials on asset restitution and indemnification, use the following Library of Congress subject headings to retrieve the most relevant citations: